With worldwide pandemics an the increasing possibility , choosing the right Travel Insurance have never been more essential. The wrong choice now could have disastrous repercussions if you have to claim whilst abroad.

Comparing numerous policy terms and conditions can be daunting as well as time consuming. Our independent rating and review highlights the important points we think you should know about when choosing your next travel insurance policy.

Once you have read this review of Travel Insurance Direct and compared polices using our unique search facility, you will have all the information you need to make an informed choice.

Our review of Travel Insurance Direct will highlight:
...and what makes us unique?

Click here for a range of alternative travel insurance quotes

Travel Insurance Direct is a trading style of Travel Insurance Agencies Limited, based in Norwich they have been servicing the travel industry since 1998.   Examples of quotes for a 39 year old to Europe for 7 days started at £11.98 for their basic policy, rising to £22.98 for the premier policy.  All Single Trip and Annual Trip policies offer £10 million worth of Medical Expenses cover.   Their Backpacker (Discovery) Policy prices for anyone up to age 45 start at £179.61 for a years policy on their basic policy, rising to £329.61 on their premier policy.

You can add Winter Sports and Golf cover to all policies, you can also add Motorcycle Touring to your Single Trip Policy.  There is a separate policy if you require business insurance, prices for a Business Annual Multi Trip Policy. for a 45 year old making multiple trips to Europe for up to 24 days a time, start at £38.43 on their standard policy, increasing to £46.89 on the premier policy.

Click on the white bars on the right side of the policy boxes below. Expand the content to view star ratings of all policies offered by Travel Insurance Direct.

Thats Insurance found no policies available for this section.

1. What is the age/classification of a child on the policy?

Children are classed as persons aged 17 or under.

Single Trip Travel Insurance maximum age is 74 years  (69 if Motorcycle cover is required. 69 years for shorter stay including Winter Sports or 45 if you require a longer period of insurance)

Annual Multi Trip Travel Insurance maximum age is 69 years. Medical Expenses and Cancellation excesses are doubled for persons over the age of 66.

Backpacker (Discovery) Trip Duration is up to one year and four months.

Any trips with a duration in excess of 4 months, include one return home visit during the period, for which time cover will be suspended.

4. What are the options for Winter Sports cover?

Wintersports can be added for the entire duration of your Single Trip Policy, for Annual Policies this is limited to 24 days provided the appropriate premium is paid.  (There is no cover for winter sports if you choose the Basic or Light policy).

If you require Winter Sports Longstay (for the Ski Season) a maximum age limit applies of 45 years.

5. What is classed as a family and how many people can be quoted for?

There is no specific definition for a family on the policy, however when obtaining a quote, children are classed as persons aged 17 or under.

There is a limit of 20 persons on any one policy.

6. What are the policy rules on reciprocal health agreements (EHIC, Medicare)?

7. What is covered under Sports and Activities on the policy?

Activities are split into Groups 1 to 3, with an additional section for Wintersports. There are 50 activities covered in Group 1, benefiting from the full policy cover levels.  There are a further 10 activities in Group 2 and 19 Group 3, these are subject to 50% reduction in Personal Accident Benefits and the Medical Expenses Excess increases to £300.

The policy states you are not covered "from Your suicide or attempted suicide or willful exposure to danger (except in an attempt to save human life), sexually transmitted disease or the influence of or in connection with the use of alcohol or drugs, unless as prescribed by a treating Medical Practitioner"

In other words, you drinking too much alcohol. Travel Insurance direct do not expect you to avoid alcohol, but will not pay claims that are the result of you having drunk so much alcohol, that your judgement is seriously affected and it causes damage or injury.

9. Does the policy cover Scheduled Airline Failure or Financial Failure?

Scheduled Airline Failure cover is provided for the Light, Standard and Premier Policies, but not the Basic Policy.  Cover amount differs from the Backpacker (Discovery) Policies, for example, the Light Discovery Policy gives £1500, whereas the Single/Annual Policy gives £3000. So if this is an important consideration, ensure to select a cover level that meets your needs.

Scheduled Airline Failure cover will only provide protection for irrecoverable sums paid in advance for Scheduled Airline flights booked in the UK, that do not form part of an inclusive (or packaged) holiday prior to departure.

10. Does the policy cover Pre-Existing Medical Conditions and can I get a quote online?

This policy has an extensive list of conditions that you do not need to go through their Medical Screening process to be covered for.   This is listed on page 5 of the policy document.

Additionally there are further conditions listed here which also include acceptance for Type 2 Diabetes, provided this is managed via diet alone and only 1 medication (non insulin), you are a non smoker (12 months) and have never been admitted to hospital.  So its definitely worth checking this list also.

If you do need to contact their medical screening company you can call them on 0344 573 4171, you should declare fully all medical conditions, including any that are listed to ensure an accurate medical screening.

At the time of writing this review there was no online medical screening process available.

If you have a medical condition that does not form part of the list, and the requirements for acceptance, you will need to go through a Medical Screening process

11. What are the policy rules on travelling when pregnant?

The Policy states "As is consistent with the treatment of all Pre-Existing Medical Conditions under the Policy, the Policy does not intend to cover the normal costs or losses otherwise associated with pregnancy (including multiple pregnancies) or childbirth. This includes, but is not limited to, delivery by caesarean section or any other medically or surgically assisted delivery which does not cause medical complications. The Policy does, however, cover You should complications arise with Your pregnancy due to Accidental injury or unexpected illness which occurs while on Your Trip."

12. Will I be covered if I want to do Manual Work or Bar Work or other work while I am on holiday?

Group 3 activities on the policy cover you for Bar Work, Charity/Conservation Work (hand tools only) and Fruit Picking.   They are subject to a 50% reduction in Personal Accident cover and an increase on Medical Expenses Excess to £300.

13. What are the requirements, if I need to claim for lost, damaged or stolen baggage?

Personal Effects and Baggage are not covered under the basic or light policies. Receipts are required to validate your claim for delayed baggage and although there is no specific mention of a requirement for receipts for lost baggage, there is a general requirement for receipts throughout the policy wording so we would strongly suggest that you retain proof of purchase or a current valuation for any items you are taking on holiday.

It's also a good tip to take a picture of the contents of your suitcase as proof of what you are taking.

14. What does the policy cover in the event of war, terrorism or cyber attack?

2. i) Any direct or indirect consequence of terrorism as defined by the Terrorism Act 2000 and any amending or substituting legislation. We will, however, cover any loss or damage (but not related cost or expense, caused by any act of terrorism provided that such act did not happen directly or indirectly because of biological, chemical, radioactive or nuclear pollution or contamination or explosion
iii) Any direct or indirect consequence of war, civil war, invasion, acts of foreign enemies (whether war be declared or not), rebellion, revolution, insurrection, military or usurped power, or confiscation, nation-alisation, requisition, destruction of or damage to property by or under the order of any government, local or public authority. iii) seizure or illegal occupation; or
iv) confiscation, requisition, detention, legal or illegal occupation, embargo, quarantine or any result of any order of public or government authority which deprives You of the use or value of Your property, nor for loss or damage arising from acts of contraband or illegal transportation or illegal trade; or
v) discharge of pollutants or contaminants, which pollutants and contaminants shall include but are not limited to any solid, liquid, gaseous or thermal irritant, contaminant or toxic or hazardous substance or any substance the presence, existence or release of which endangers or threatens to endanger the health, safety or welfare of persons or the environment; or
vi) chemical or biological release or exposure of any kind; or
vii) attacks by electronic means including computer hacking or the introduction of any form of computer virus; or
viii) threat or hoax, in the absence of physical damage due to an act of terrorism; or
ix) any action taken in controlling, preventing, suppressing or in any way relating to any act of terrorism. "

15. Does the policy cover natural disaster or catastrophe before and during my holiday?

The Policy States "The Insurer will pay You up to the amount shown in the Schedule of Cover in respect of additional travel and accommodation expenses necessary to continue Your Trip or, in the event that this is impossible, Your return Home if You are forced to relocate from Your pre-booked accommodation as a result of a Natural Catastrophe (which means: fire, lightning, explosion, earthquake, storm, tempest, hurricane or flood). "

You are not covered for:

16. Do I have to be a UK resident to be covered under this policy?

You are required to be a UK resident and be registered with a Medical Practitioner in the UK.

That's Insurance have spent some time mystery shopping on travelinsurance-direct-review's website. The policy wording, website, customer service/buying process have been carefully reviewed and each section awarded a user friendly score, which you can see below.

The scores have been calculated as an overall percentage and shown on the three gauges. You can see how Travel Insurance Direct compares to the industry average. The higher the percentage the better the company performs in each area.

We've listed below cover levels for policies offered by offered by To scroll through all policies, click on the arrows on the left and right of policy name section.

Listed below are some Sample Quotes offered by Travel Insurance Direct 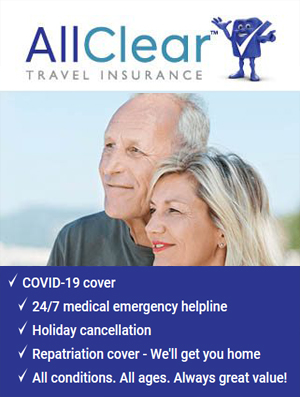